I thought it was a joke when the folks at 2Toms contacted me to see if I wanted to do a product review for them.

It seemed a little too perfect for my maturity level.

Ok, but on the for reals side, Butt Shield is exactly the kind of product you need if you plan on doing any sort of long distance running. Claims from their website include things like: 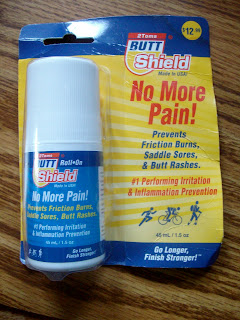 I can think of a couple of other body parts that might need Butt Shield as well. But when 2Toms contacted me, I hadn't made it to that point in my training that necessitated a product like this (although, Brandon did). So, of course I said, "yes! I will absolutely try Butt Shield!!"

When I got the sample from them, our next long run was a 13-miler. It was still hovering around freezing and I was still wearing my spandex - which doesn't allow for a lot of skin-on-skin movement. When I was training for Akron, my trouble areas were between my thighs (thanks, short running shorts) and under my armpits, above the sports bra line. I wanted to wait to try out Butt Shield when I really had the chance to; when the cold weather eased up and I was finally able to put on shorts and a t-shirt!

Little did I know that 14 miles would do me in. Even though the day we ran our 14-miler, I donned the same spandex pants and Under Armor top that I always wear in cold weather...my butt cheeks apparently had other plans. Yep, didn't think I was going to need Butt Shield until I actually needed it. That's the thing about chafing. It's not a problem, until it's a problem.

I wasn't about to make that mistake again - I obviously put Butt Shield on for our 16-miler last Saturday.

My thoughts? Being starkly honest here, at the beginning of the run, it gave me a bit of  "wet" feeling wherever I had applied it...which was a bit uncomfortable. I'm not sure if it had rubbed itself off or in or what, but after a few miles, the uncomfortable feeling went away. I'll tell ya what though, after 16 miles my butt was happy as a clam! It definitely works for your longer distances.

The downside is that one bottle of this stuff is going to run you $12.99 or so. While it is incredibly convenient, my prior attempt to avoid chafing was to rub deodorant on the area...which works just as well. I used deodorant during the last marathon that I ran. I will say though, with Butt Shield you are pretty much guaranteed not to chafe, while if you use deodorant, it's liable to rub off in the course of 26.2 miles, leaving you no better off than if you hadn't used it at all (just a disclaimer, since deodorant does not claim to be an anti-chafing agent).


That said, it's certainly worth the 13 bucks, if you want to avoid the pain after your long runs (getting in the shower is the WORST!) also, if you don't want to fork up the cash for diaper rash cream (a.k.a. zinc oxide) which, yes I do own due to some prior chafing experiences.

DISCLAIMER: I was given a sample of Butt Shield to try and, if I wanted to, review on PL&B. The views and opinions expressed in this post are my own.

What steps do you take to protect yourself from the dreaded long run (or ride...or pole vault...) chafe?