Anatomy of a Training Run: Fueling for Long Runs

Don't take this post as "the best way to fuel during a long run". It's definitely not. Take it at face value; it's a list of all the things I've stumbled upon for long run fueling and what I've found is best for me, based on my experiences. The best long run fuel for you might be completely different, so my overall message is please listen to your body, experiment during training and most of all, don't change anything up on race day! 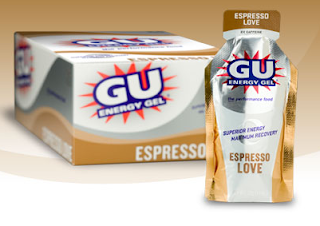 When I was training for my first half marathon, GU was my fuel of choice. Espresso Love was my favorite flavor, because it had extra caffeine in it...which has a good reputation when it comes to distance running. The only place I could figure out where to keep it was in my sports bra, which worked out pretty nicely most of the time. I would take one pack with me and that would easily get me through 13.1 miles, because I'd only eat half at a time.

The problem with GU came when I was training for my first marathon. I had to bring more with me, so my sports bra was no longer a good place to keep it. I started to pin a few to my shorts, but sometimes that wouldn't work because the packs would rip through the pins and fall off (no good, since they're not exactly cheap).

My final straw with GU came during that first marathon though. They had GU stations every so often, so I decided to just take what they had...the flavors were vanilla and chocolate...two flavors I wasn't used to. By the time I went through the last GU station, I thought I was going to hurl because the flavor, volume of GU consumed and the consistency finally got to me. Not only that, but since I've started to mindfully eat more whole foods and limit the amount of processed foods and unpronounceable ingredients that I put into my body, GU doesn't exactly fall into the "whole foods" category: 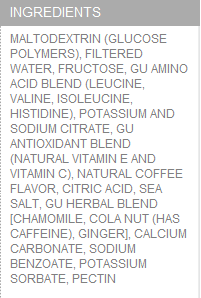 So that was enough of that.

Then I tried a few different sports drinks, Cytomax, Accelerade, a bunch of other things that I don't even remember, but wanted to try. I don't like sports drinks. Give me good 'ol water any day. There's something about these drinks that just never sit well with me - so I ended up giving them all up pretty quickly. Plus, they're also not cheap!

Ok, so it's at about this point in my life when I start realizing that I don't want to refuel with a bunch of processed energy supplements. I could easily spend less money and get the benefits of whole, unprocessed foods in my system by just doing a bit of research.


I started with a classic: raisins. They are absolutely great for fueling on long runs! Also, the tastiest raisin you'll ever taste is the one you eat while you're exercising. My problem with this was that I don't buy raisins often enough to bring them on my runs on a weekly basis. Also, they can be pretty sticky. Sometimes I felt like I needed to eat more that I could to keep myself going too. Oh, and keeping them in my sports bra was always touch and go...they do take up a little more space than GU packs.

I have tried GU, various sports drinks, candy, raisins, nuts...basically I've been there and back trying to find the best method for me to fuel during my long runs. Well, I've finally found a few things that I can't live without during my endurance workouts: energy bites and maple syrup water.

As you know, I discovered a new love for my Camel Bak but one of the biggest pro's of the Camel Bak is all the storage space for other things you might need on your run: food, an ID, phone, etc. I like to keep my energy bites and another small water bottle full of maple syrup water in my Camel Bak.

The energy bites are an Oh She Glows original recipe that I stumbled upon one day and haven't looked back since the first time I made them. You can find that recipe here. They are nutritionally stacked and one bite will easily fuel me through the toughest miles of my run. Plus, they're sweet and delicious; dates, almonds, sunflower seeds, the works. They're also really great for traveling, because they are small and store well.

I read something somewhere about making your own sports drink my mixing maple syrup into water. That was probably the happiest day of my life! I was brought up on real Vermont maple syrup and it is one of my favorite sweeteners. A diluted version of it is just as delicious. And it makes sense! Sugar + water = a blast of carbs that quickly goes straight to where you need it, without taking the time to get your stomach working to digest it.

So that's the way I've been fueling for long runs during my training for the Cleveland Marathon, and it will be no different on race day. I'll come equipped with my energy bites and a bottle of maple syrup water!

How do you fuel up for long runs?