29 December 2010: Defining moment. Describe a defining moment or series of events that has affected your life this year.


Here's where I was in my life: content, but stagnating. Bored.


A friend from college, and Dave Matthews enthusiast, had been trying to get me to go to a DMB show for years. Since I've moved to Ohio, he has come to Blossom every single year (although, apparently he's done touring so that won't be happening in 2011) and John (DMB enthusiast, college friend) has texted (is that even a word?) me every single year telling me to get my butt to the show. He called me right before we left to tell me how excited he was and closed our conversation with, "don't forget to hippie dance for me!" Don't worry, John, I didn't.


Finally made it this year. Armed with my roommate at the time, Emily, we packed our cooler full of booze and hit the road (for the ten minute drive). Greg, my boyfriend at the time, wasn't interested in seeing the show and had previously sent in his absentee ballot. In retrospect, it was the worst choice he could have ever made as my boyfriend. 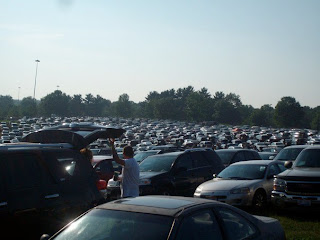 The "parking lot" at Blossom was incredible. Their lot is really just a huuuuuge field of rolling hills. That day, it was absolutely packed with cars. So when Emily and I had boozed up sufficiently (and by "sufficiently" I mean I was toasted in one drink--and I even spilled half of it on myself), we took our roll-y cooler on the mile-long hike to a different area of the parking lot to meet up with more of Em's friends. 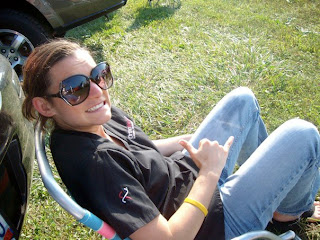 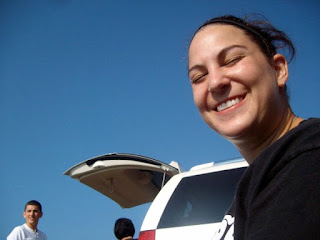 
His friends described him as this super easy-going hippie. Emily described him as "Becca-sized" (he's 5'5"...and, ahem, we prefer "fun sized"). Ok, so there was a brief greeting and introduction and I commented on his Om necklace (actually, I was highly intrigued because I don't know many male specimen with much knowledge on the subject and I have learned a lot about it this year) and then he trotted off to engage in discourse with a limo driver who had had a small guitar left in his limo the night before.


Amber (Emily's friend) immediately let me know that if I wasn't dating Greg, she would be setting me up with Brandon. My response? "I always keep my options open." Yep, I obviously hadn't met Mr. Right yet. Plus, like I said earlier...my life had stagnated. I was content, but borderline unhappy. I needed to start letting go of the things that did not serve me, as all of my yoga teachers constantly quipped.


On to the show. I knew a total of two of the songs he played that night, but I enjoyed every single minute of it. I remember at the very beginning, Emily and I braved the pulsing crowd and walked from one side of the pavilion to the other. All I could smell was marijuana. All I could see were people truly living in the moment. Enjoying every sound, every word, every feeling, every movement. I remember thinking "why don't I have that?" It was like they had reached pure enlightenment and it was beautiful to behold.


When we got back to our group (up a couple of drinks, of course) Dave played the song "Ants Marching". It was the one and only song Emily wanted to hear. So we got up and danced together, and that's the first time I did it. I let down my hair and did my hippie dance!


and there it was...my true self. Not only could I appreciate all those people enjoying life and the music that came with it, but I could feel it now too.


The only other song he played that I knew was "You and Me" and I guess it isn't surprising when I say that it wasn't Greg I was thinking about. For some reason, Brandon couldn't find his way out of my head. Later on, I got to share my hippie dance with him too. When everyone had decided to leave, he stopped me to dance with him through the last song that was played, "#41".  When it was over, I turned around expecting everyone to have left, but there they were, watching us dance our silly hippie dance and patiently waiting for us to let the moment go. Emily told me "you guys looked so cute." Thanks Emily, as if my brain wasn't already in over-drive.


I don't think I have done any justice to all the points in the night that Brandon and I truly connected. There were some moments in the parking lot, there was a conversation about silly bands and Ganesha, there was a dance here and there. The whole night definitely had me reeling...and wondering why I was okay being just content Greg when I saw absolutely everything I valued in my life embodied in Brandon.


The after concert plans were to go to Keri's house (one of the girls in the group we were with) for a bonfire. Yes! I'm excited about this because it means I can spend more time with Brandon. When we got there, Emily and I poured one more drink for each other (I made her finish mine) and we sat around the fire. I guess Brandon was in pretty bad shape at that point, because he stayed for about 5 minutes and then got up and went inside.


I never saw him again that night. He didn't even say goodbye.


(Hahaha, that last sentence is just to pour more salt in the wound for him...it did turn out to be a rough night for him, as I believe there were some upchuck reflexes involved).


The short of the long is, we did reconnect. I did break up with Greg. I haven't looked back once. I'm happier than I have ever been and I can always recall the feeling I get when I let down my hair and did my hippie dance, because I have Brandon by my side.

The Dave Matthews concert was my defining moment of 2010. What was yours?
Labels: #reverb10, 2010, Dave Matthews, new year, reflections

I totally love this story!

Cute! I love that although you didn't go from zero to 60 that night, you DID reconnect in the end. Congrats. :)

the Answer is "YES" people! It wasn't so much a "reconnection" as I see it, it was more an "affirmation!" I WAS drunky brooster that night, (cause my whole "post-concert meal plan" was foiled! I couldn't go back in the car that i came in, which meant no water or food for Brandon) which is why I quietly excused myself from the bon-fire, to call up some dinosaurs! After collecting all the pieces of my head the next morning, while waking up on a couch....when i fell asleep in a chair.....Becs was the first person I thought of, my next immediate thought was "damn....I didn't even say goodbye!" Sooooo thank you "Facebook" for making it so easy to connect/reconnect with a soulmate, after a night to remember!

As Becca's former roommate and an attendee of the concert I would just like to add a point not reflected in this post...Greg was a friend of mine for 15+ years and I had a hand in introducing him and Becca (even though I almost ruined it by forgetting to call Becca). With that being said, the MOMENT I met Brandon I thought to myself and even said to Amber, "Greg is screwed". So Becca was quite right, him not coming to the Dave concert was probably the worst decision he could make. Love you two!!

Awesome story! You guys really do look cute together!